Masking is one of those techniques that sometimes you don’t even realize you’re doing. However, there are a ton of tricks that you can do with masking – some of which were new to me as I was going through the Masking Unleashed class as a part of the Altenew Educator Certification Program. Today’s cards use simple masking and negative space masking together on each card. 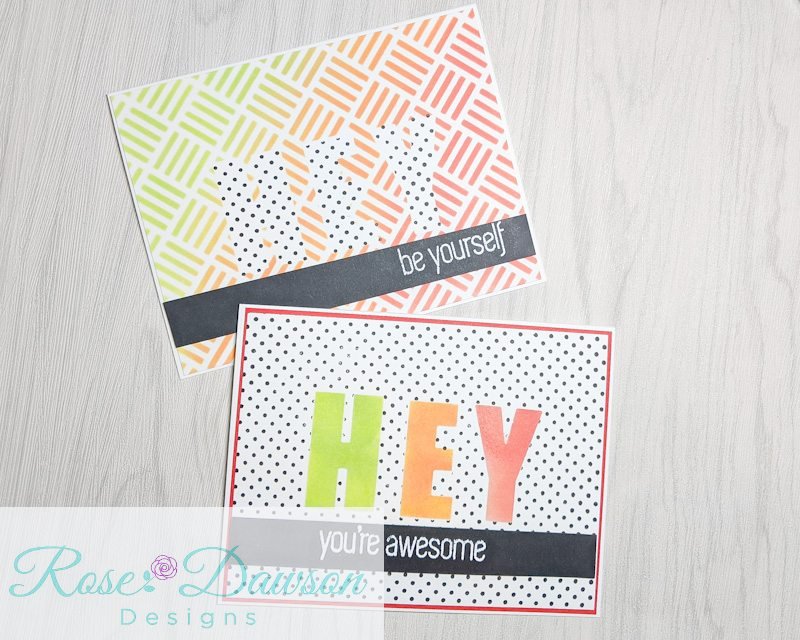 Alright…so first things first. I started off with using Altenew’s Caps Bold Alphabet Die to cut out “H E Y” out of Inkadinkado’s Stamping Mask Paper– This will be for my positive space mask. To make sure that the word is aligined properly by lining the letters up on the grid lines of my Tim Holtz Tonic Glass Media Mat.

Once lined up I then used a piece of Therm-O-Web Purple Tape to hold the dies in place. 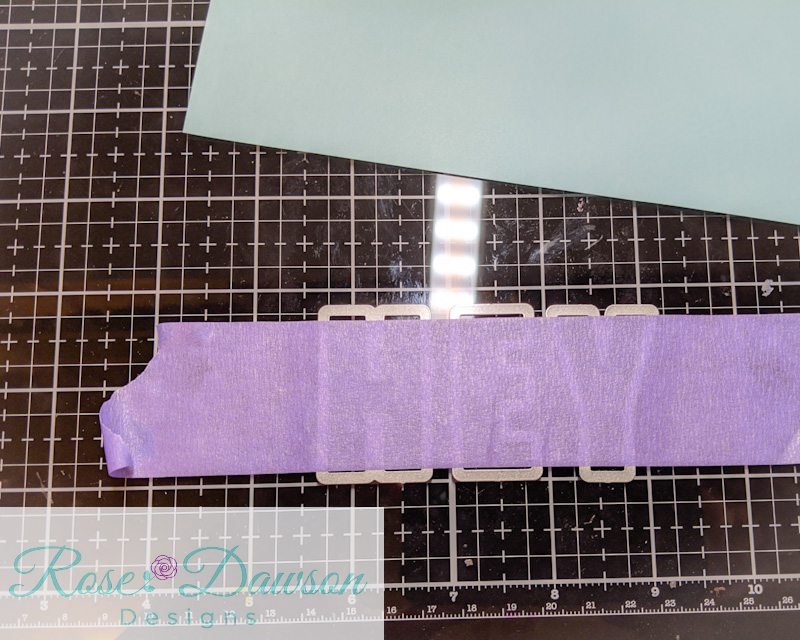 Then I placed the dies on the Masking Paper and ran it through my Spellbinders Platinum 6 Die Cutting Machine and pulled out the die cuts.

Then I placed the Die cut Masking paper pieces on an A2 panel of Neenah Solar White cardstock. Then I lined up Altenew’s Square Weave Pattern Stencil and adhered it using purple tape. 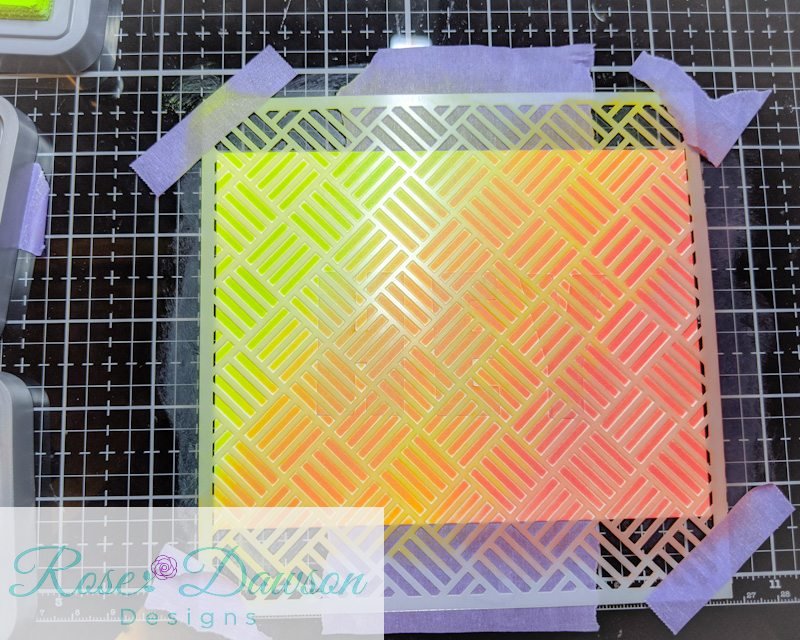 Then I removed the stencil to see the really pretty blended panel. 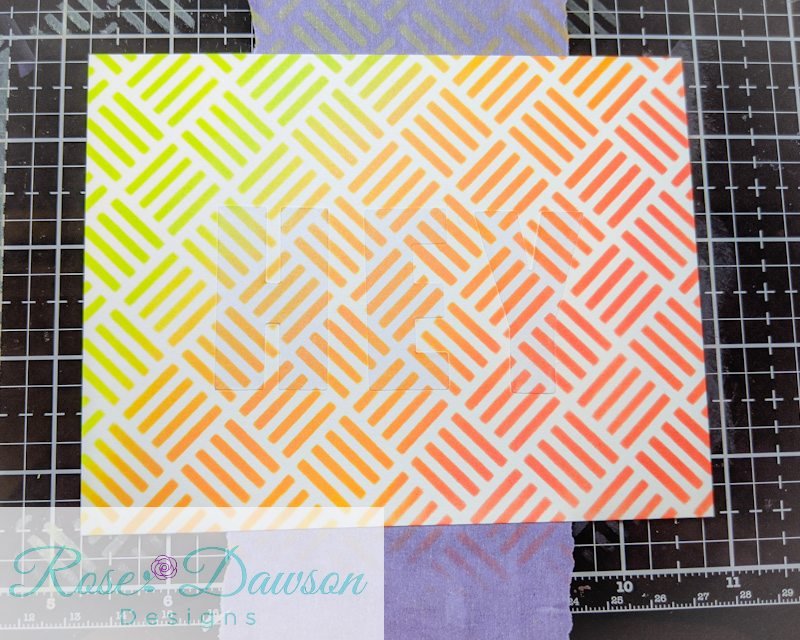 Now..to reveal the sentiment…I slowly removed the masked letter with tweezers to reveal the Neenah Solar White letters beneath. 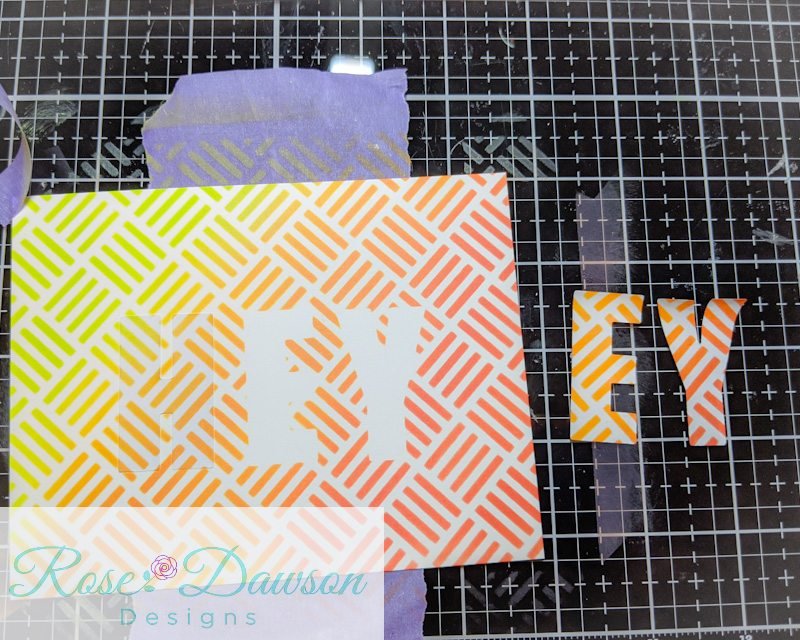 Then I lined up the die letters again and secured using purple tape by lining it up over the clean letters on the blended panel – in retrospect I should’ve kept the letters together from the first cut run…but you live, you learn!

Then I ran the letters through my die cutting machine again but this time over an A2 panel of printer paper.

Then I placed the panel into my stamping tool – I use the My Sweet Petunia’s MISTI Stamping Tool. I added a bit of removable adhesive to the back of the panel as I won’t be able to use magnets with a background stamp. I’m using Altenew’s Dainty Swiss Dots stamp set and Altenew’s Obsidian Pigment Ink. Be sure to really press down on the door of your stamping tool as there is a slightly raised edge where the printer paper cut outs are and you want to really make sure the dots get through. 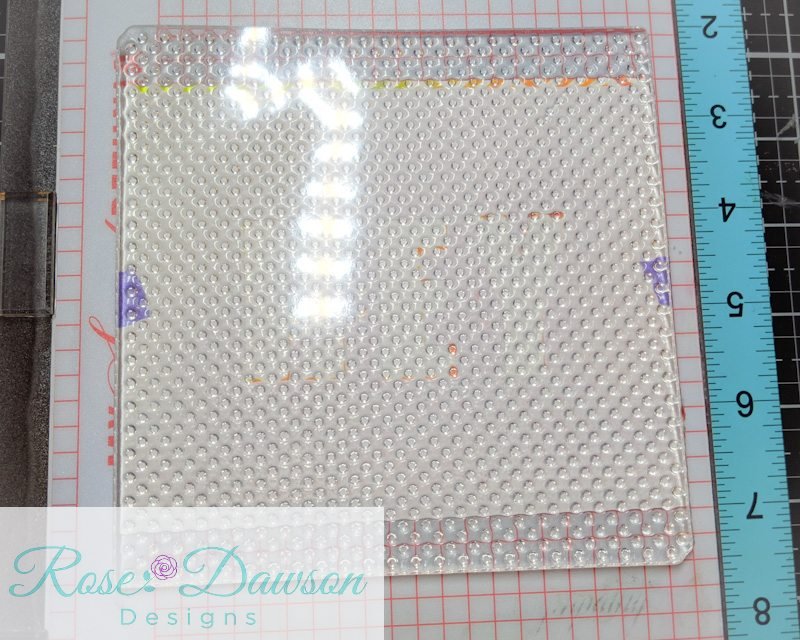 After stamping down…here is the result. 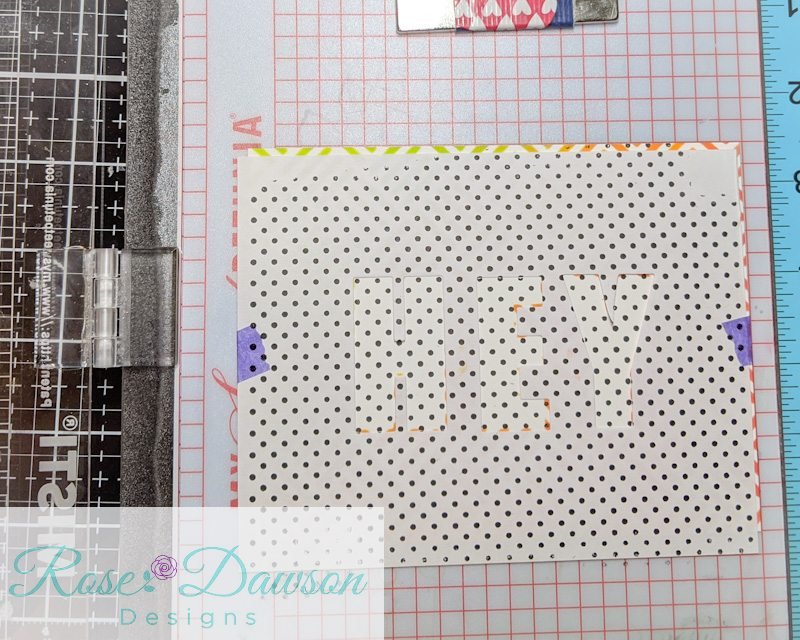 I removed the printer paper mask to see the result. I could’ve lined the letters with a black pen for some added contrast, but I opted to leave it as is. 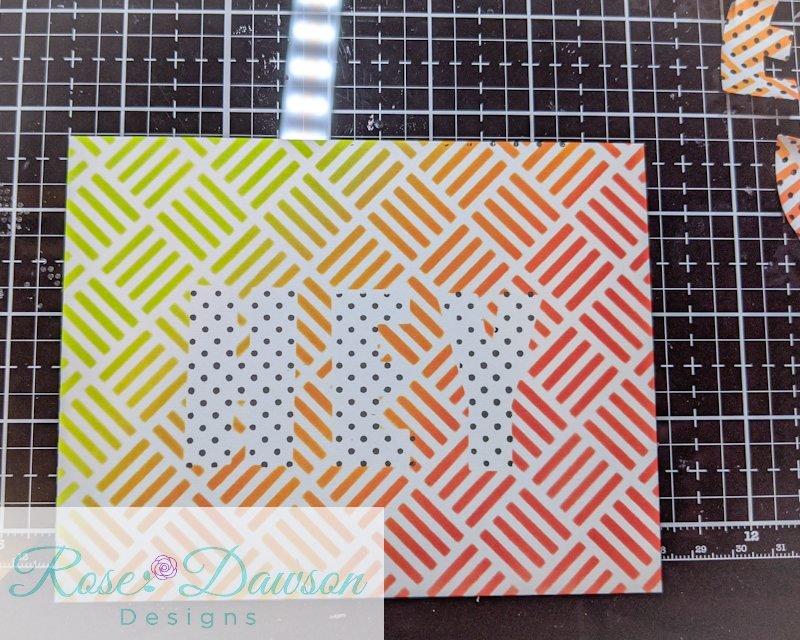 Now…a small pause from card 1, to show you the start of card 2.

Here I grabbed an A2 panel of Neenah Solar White cardstock and applied the printer paper mask with a little additional temporary adhesive, focusing on the smaller pieces within the “H” and the “Y” to make sure they stayed down. 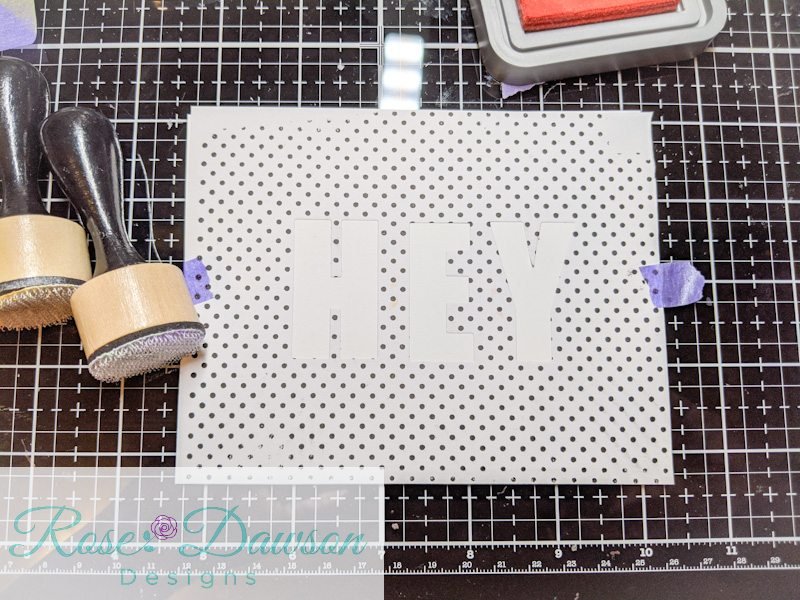 Then I grabbed my blending brushes again, as well as the Distress Oxide Inks again in Twisted Citron, Spiced Marmalade & Candied Apple. I applied a generous amount of ink to the panel through the die cuts. I wanted to get a very saturated colour, so I applied a few times. 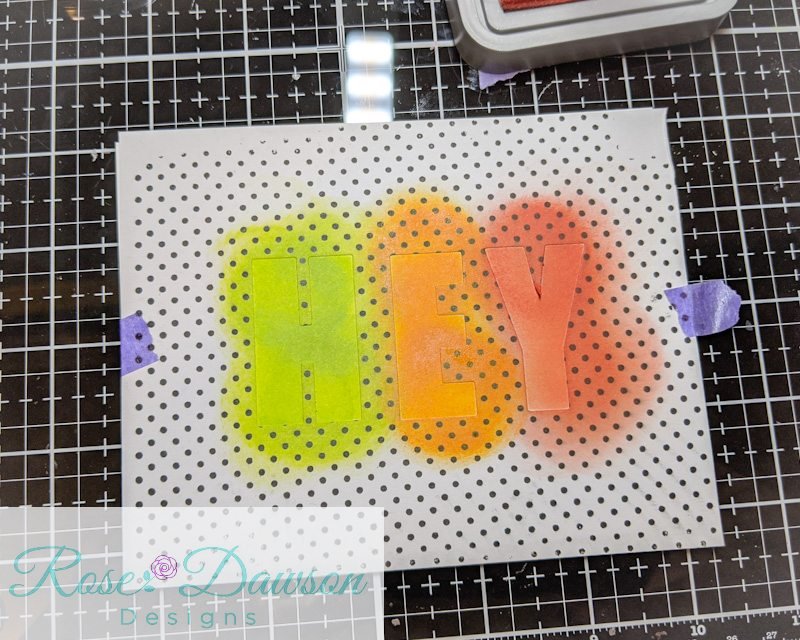 I removed the printer paper panel to reveal the vivid colours of the HEY.

Then I applied the die cut masking paper previously cut out and used on card #1 and applied them over the Oxide panel to cover the letters. 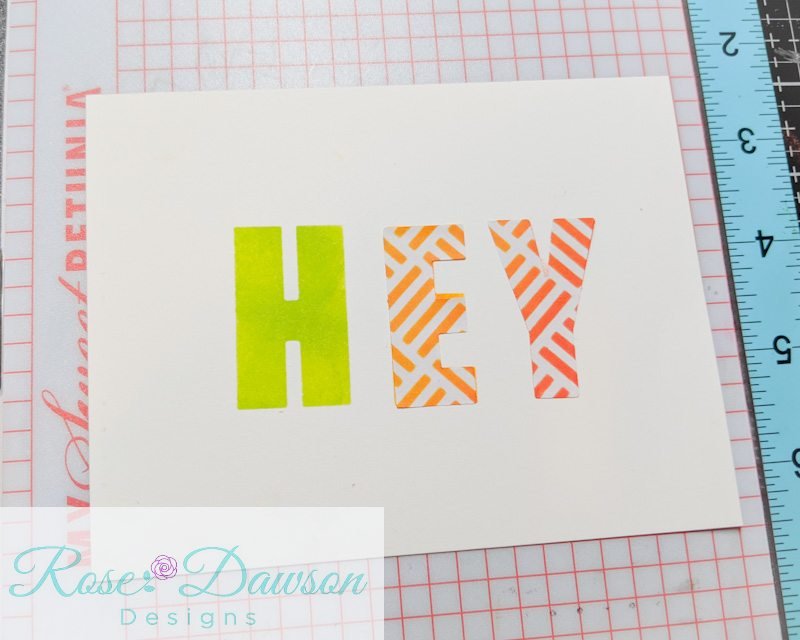 I placed the panel into the MISTI and then using the Dainty Swiss Dots background stamp and Altenew’s Obsidian Pigment Ink and stamped it down. Again, I was sure to press firmly, especially around the masked die cut letters. 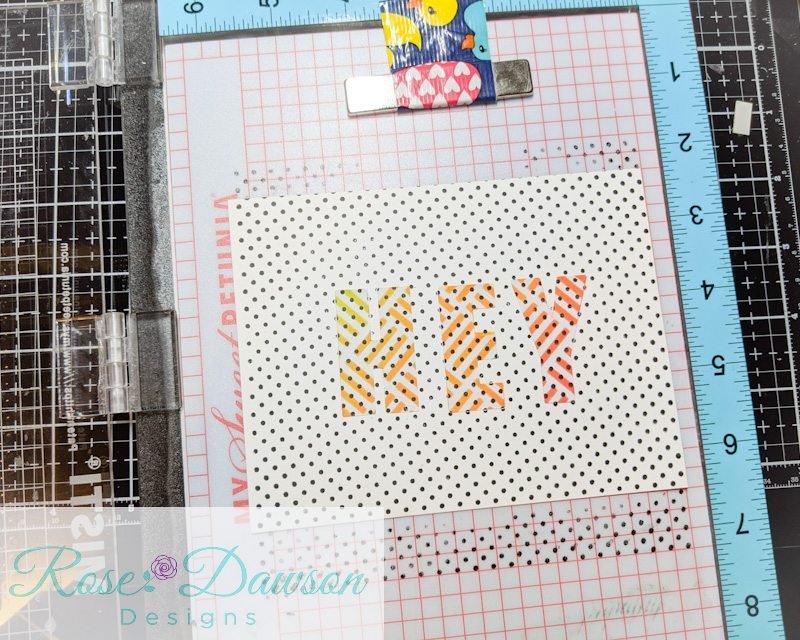 Then for the reveal…I removed the masking paper to reveal the very vivid colours of the sentiment “HEY”.

Alright…now back to the sentiment trips for both cards. I wanted a bit more black on the card to help allow the colours to POP! I used sentiments from the Swiss Dainty Dot stamp set and grabbed “be yourself” and “you’re awesome” and used Tsukineko’s Versamark Ink  and Brutus Monroe’s White Alabaster Embossing Powder to heat emboss on Simon Says Stamp’s Cardstock in Black.

I adhered the panels to A2 sized card bases and then I trimmed down the sentiment strips and used some Simon Says Stamp Big Momma Foam Tape to pop up the sentiment near the bottom of the panels.

Then I added some washi tape to coordinating envelopes and the cards are complete! 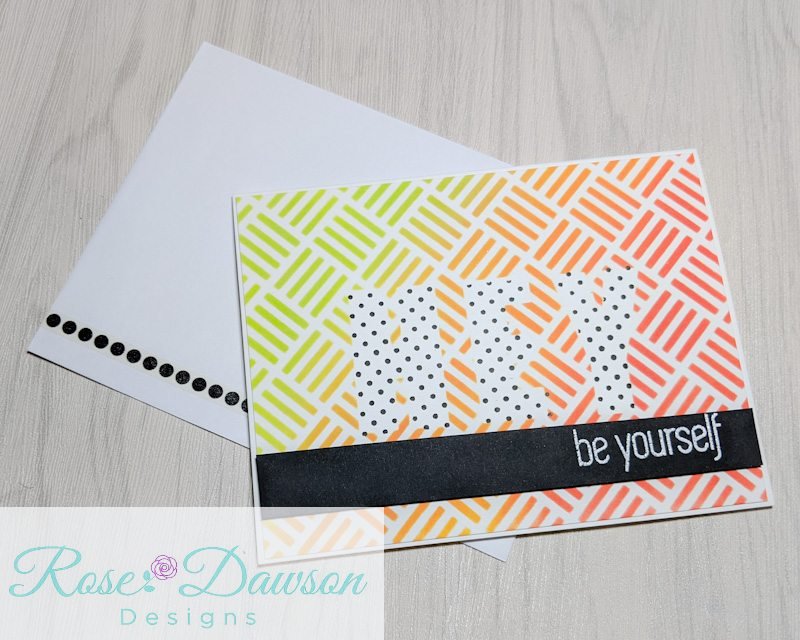 I am a creative mind using cards as a medium to express myself. I create handmade cards and invitations for all occasions. View all posts by rosedawsondesigns

This site uses Akismet to reduce spam. Learn how your comment data is processed.

Unfortunately I wasn't able to get everyone who won to claim their prize. Out of the 15 boxes, I've sent off 5...meaning there are 10 boxes up for grabs still!
Thanks to everyone that participated in my 500 Followers Mystery Box Giveaway!
HOORAY! I'VE HIT 500 FOLLOWERS! - CLOSED!
A beautiful mistake!
A note of encouragement for a distant friend
Some Stencil fun to show a bit of support